Creating the next generation of Progress OpenEdge professionals

At the beginning of May 2018, Wirtek celebrated a year since the opening of our Progress office in Bucharest, a branch we have in partnership with Mark Information that is managed and operated by Wirtek.

The past year came with its challenges since the primary focus of our office is Progress OpenEdge technology. Our purpose was and still is, to grow the team and build Progress competences in Romania, as a first step to becoming a Progress Center of Excellence. To this end, we have created a pre-employment training program and it has proven to be one the best solutions so far.

The first pre-employment program we had last summer lead to the hiring of three people out of the initial five that started the course. Since the 2017 training was the first of this sort we wanted to give the trainees a solid knowledge foundation and at the same time make the training as attractive as possible. That’s why part of the interns that completed the first week of in-house training had the opportunity to continue learning at the Progress Academy in Rotterdam under the careful guidance of the most specialized mentors in this technology. 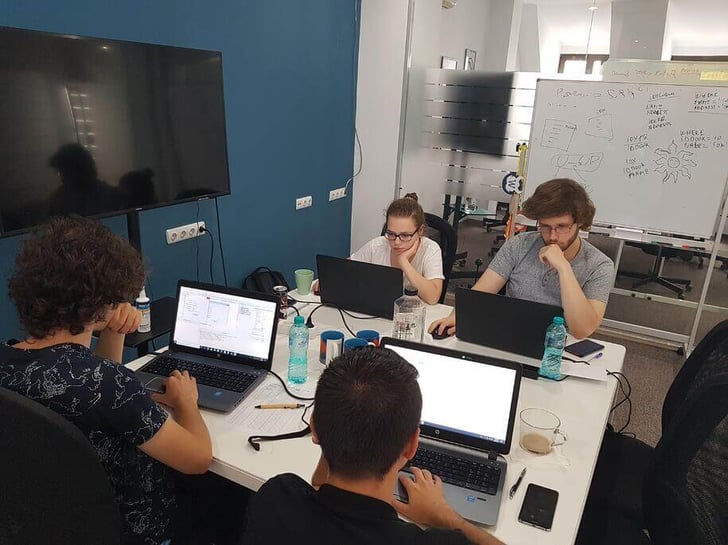 It soon became obvious that for now, this is the right approach in order to build Progress skills, for several reasons. One is that students are not taught Progress OpenEdge at the technical universities, so they don’t have competencies in this area. The other is that this technology represents quite a narrow segment of software developers in Romania, so finding the right talent locally is a challenge. This was to become a yearly pre-employment program.

We have recently finalized our second Progress pre-employment training, focused on backend, using Progress OpenEdge as the main technology. This time one of our experienced and talented Progress developers shared his knowledge with the interns during the four-week training hosted in Bucharest.

This year we created a project that requires a simulation of “real life”. Since our main client in Bucharest is Mark Info and their product is a Workforce Management System, it was logical that the trainees would start a little workforce project to create and manage employees. Covering the basics of OpenEdge ABL, the interns got to perform even complex tasks.

One of the big pluses of OpenEdge ABL is that it’s easy to learn. It offers the option to write the same functionality with less code and the language structure is user-friendly, not requiring an understanding of the machine code. That’s why after these four weeks, the interns could be ready to become employees as Junior Developers. As their mentor, Rodrigo says: “We expect from this training that all of them will be able to start working on real tasks from our clients since day one after they’re hired.”

With our second internship for Progress, we had a pleasant surprise to have a team of four interns, all girls, as opposed to last year’s, when most of the interns were boys. This comes to show that despite the challenges, students are still interested and willing to take the chance of being part of something different and start a career as Progress developers at Wirtek.

Viralink, a new collaboration in Norway

We’re happy to announce that Wirtek has recently signed a new client in Norway. Viralink is a startup created to address the necessity in the...

In 2017 Wirtek entered into a strategic partnership agreement with Mark Information A/S to establish a new Progress OpenEdge development and test...

Wirtek and RTX have entered into a contract that for the present will be in force until June 2009. A dedicated team at Wirtek’s branch office in...